Shirley Gleeson, nature and well-being consultant and leader of the walk, tells us that what we are about to embark on is not like a hike or a naturalist trail.

Instead, she explains it’s about “focusing on your senses – what you see, hear, smell, touch and taste – and it’s about connecting with nature, by slowing down and getting into your body.”

Another aim of forest bathing is to foster a love of, and protectiveness towards, the natural world. According to Gleeson, environmental education isn’t enough to foster a true connection with nature.

Forest bathing emerged in the 1980s in Japan as a treatment for stress-related health issues. It became a way for city dwellers to reconnect with the natural world

Everyone is dressed for the outdoors – in rain jackets, hiking boots and small backpacks – but there is no need for bathing suits: the term forest bathing is used metaphorically as participants are encouraged to bathe themselves in their natural surroundings.

Over two and a half hours, Gleeson guides the group in a slow, meditative manner through different parts of the Wicklow Mountains National Park close to the upper lake. She offers prompts or “invitations” to listen to the sounds of the forest, to touch the bark of the trees or ferns, or to find “your room” in nature to spend time in. Although participants wander a little to engage with different elements of the natural world – the wind in the trees, the lapping of the lake water, the textures of the tree bark – Gleeson invites everyone back into a circle to share their experiences.

Some participants wax lyrical about their encounters, while others admit to difficulties slowing down and getting into it. There is no sense of right or wrong, no rush or coercion to speak. “Silence is also a way of sharing,” says Gleeson.

The walk ends with a tea ceremony, in which Gleeson and her co-guides pour tiny cups of tea for everyone – offering up the first cup to the forest. Although this might sound a little hippy, the mood is relaxed and respectful. Often the tea is made from foraged herbs or berries but not this time, as you can’t pick plants in a national park. 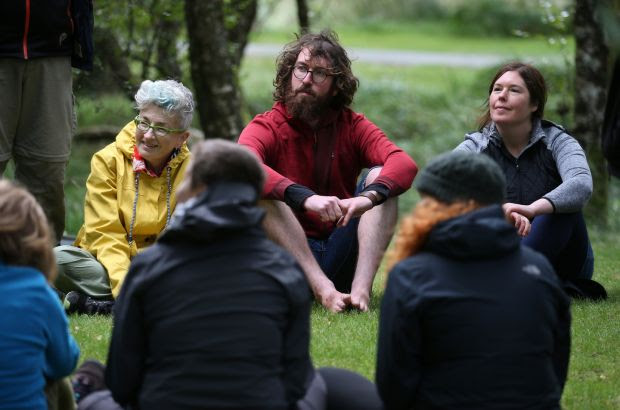 Forest bathing emerged in the 1980s in Japan as a treatment for stress-related health issues. Called Shinrin-yoku in Japan, it became a way for city dwelling Japanese to reconnect with the natural world they had become cut off from.

Now, millions of people in Japan visit around 60 forest therapy bases each year. South Korea developed similar forest therapy centres as preventive health care interventions and since then, forest bathing has developed across the world.

Gleeson, who worked as a social worker in Ireland for 20 years, trained to become a forest bathing guide in the United States five years ago. She is now director of Ecowellness Consulting and co-founder of the European Forest Therapy Institute.

She says that strong emotions can come up for people when they are in nature. “They can experience grief or trauma if there has been a history of trauma but it’s important to remember that we are guides not therapists and to make sure participants are safe and have someone to call as they leave,” she tells the group of trainee forest bathing guides.

She adds that guides also need to be aware that some people can experience eco-anxiety or eco-grief more sensitively when they are connected to nature. “If this arises, I ask them if there is something they’d like to do to help the natural world, maybe to join an environmental NGO. That can be empowering for them.”

The European Forest Therapy Institute – which is not as yet regulated by any national or international regulatory body – also runs longer courses for forest therapy guides. The organisation defines forest bathing as a wellness practice to prevent ill-health and forest therapy as a treatment or rehabilitation for people with mental or physical health problems.

The institute training also includes scientific evidence on various aspects of the experience of being in a forest. Central to this is how antimicrobial volatile organic compounds called phytoncides have been found to reduce blood pressure and enhance the immune system.

Angela Stangoe and Evelyn Cecil have travelled to join the training group in Glendalough from their jobs at the Mind mental health charity in London. Both have already completed an earlier training in the UK and run a weekly forest therapy session with a group of people with complex needs ranging from schizophrenia to depression to learning disabilities.

“We use woodlands and a local park and it’s one of the most popular things we’ve ever done. It encourages people who wouldn’t usually go to natural places to be healthy and to reconnect with nature all at their own pace,” says Stangoe, who hopes to introduce forest therapy to other branches of Mind across the UK.

She adds that people who are ill are often very inward-looking and you can’t be inward looking when you’re outside. “We’ve quite stressful jobs too and at the end of the walk, we are really calm too. There’s something about taking people outdoors that really seems to work.”

Luke Walsh from Kilternan is another trainee on the course. He plans to open Ireland’s first healing forest on 30 acres of native Irish woodland he owns in Co Dublin. “My wife – who is a life coach for teenagers – and I plan to create trails around the forest with areas of barefoot walking and hammocks. The idea is to create a safe space for groups to visit on an appointment-only basis.

“Although, there are views right across Dublin from the forest, you could be anywhere when you’re up there,”